Much of the trip had seemed a little impossible at the planning stage. Convince Sharon to trek half way around the world, at a time when maximum temperatures were likely to only just edge into positive numbers? Impossible. Travel through so many countries, in such a short space of time, and still feel like we had a sense of each place? Impossible. Get up at 5am, make our way across an unknown city (Paris), find a completely new train station and navigate to our early train, just to journey for several hours at high speeds, to see a lump of land in the middle of the ocean? Yep, you guessed it; impossible.

And yet there we were, rugged up (as usual), Sharon with more layers than your average filo pastry, boarding the train to Mont-Saint-Michel. I didn’t have a strong idea about what to expect, but I was enjoying the adventure. And the first-class train carriage. My early advice about travelling in Europe is to always travel by trains if you have the time, and to always travel first-class if you have the money. It’s the only way to go…

The train pulled away smoothly from the station right on time, and the first half hour was spent zipping through a series of tunnels (I think? It was pretty dark outside, but these were definitely darker), each more ear-popping than the last. And then, whoosh, out into the countryside, past green-edged paddocks, tiny barns and houses with earthy coloured thatched roofs, a rather exorbitant number of powerlines, and so on, all punctuated regularly by a new ear-popping sound, that of the similarly svelte bullet trains going in the other direction. Sharon jumped a little each time, through the whole trip. At one point I looked at the speed indicator – 317 kilometres per hour. Yep, impossible, but there we were, in a smooth, air-conditioned bubble.

I’m a little hazy on the rest of this part of the trip, mostly because I might have napped a little to make up for the early start I suspect! But the hours passed impossibly quickly, and with just a short hop on a shuttle bus, there we were, at Le Mont.

When you get to Mont-Saint-Michel, you have a choice – you can hop on a shuttle bus (which is somewhat convincingly panelled to look like a wooden carriage, except for the diesel fumes and lack of a horse at the front end), you can ride a horse-drawn carriage (although the horses appeared to have slept in on the day we visited), or you can walk the 45 minutes to the island. Despite Sharon’s ongoing knee pain, we decided to act like pilgrims and make the journey on foot. I’m so glad we did. You walk along a nondescript gravel path for about 15 minutes, with very informative (I assume) panels about grasslands and birds and stuff, and then the path opens up, and there in front of you is the most impossible thing of all, Le Mont-Saint-Michel.

Frankly it’s a little hard to describe it, but just imagine your average tidal wetland. It’s flat, there’s some water but because the tide is out there’s not much of it, and a few small rocks creating something of a border or boundary for that puddly water residue, and then some muddy flatland that seems to go on forever. And then, rising out of this completely ordinary landscape (believe me, I’ve tried for several minutes here to make it interesting), is a rock. And on that rock is a wall. And behind the wall there are turrets, ramparts, buildings, flags, lights, seagulls, people, and rising above it all, seemingly perched on just a tiny triangle of land, impossibly small, is the abbey, which is everything except tiny and impossibly small. It’s quite an impression, and easy to forget where and when you are.

Once we’d picked ourselves up from the ground after being bowled over by this incredible view, we finished our pilgrimage and made our way in… Somehow we managed to find the back way to the abbey, past groups of people washing their feet after exploring the wetlands outside the walls as people have done for centuries, past armed men entrusted with keeping order as armed men have done on Le Mont for centuries (hopefully we didn’t look too rowdy), past dozens of tiny doors that seemed to lead to sheer cliff faces, or to tiny rooms with no clear purpose, up stone steps worn to smiles by generation after generation of tired feet, and miraculously to the front door of the abbey.

At this point, I’ll just share some general impressions, as the overall experience was quite profound and worth experiencing first-hand… There are still monks in the abbey. They live, work, and share their modest lives there, surrounded by swarms of tourists but somehow still able to live lives of peace, tranquility, and worship. And they have extraordinary singing voices, if (like us) you should happen to find yourself wandering through the main chapel as mass is taking place. Those voices and the whistling winds have been finding harmonies for an impossibly long time, and I feel extraordinarily fortunate that we arrived there at that moment so purely by chance. The abbey itself is almost impossibly complex, to the point where those trying to interpret the layout now are simply unable to describe why some rooms exist; there are chapels, refectories, crypts, a scriptorium, rooms with great wheels turned by the feet of prisoners held in the abbey when it was a prison, cloisters, gardens, great halls for receiving dignitaries and kings, and then there are other rooms, spaces that link these purposeful rooms, spaces with fireplaces large enough to hold entire trees, and spaces that… well, do something. It’s like a home improvement reality show has been running for centuries – “I reckon we could add another well here to really spice things up a bit”, and somewhere along the way, the reasons for that work were lost. 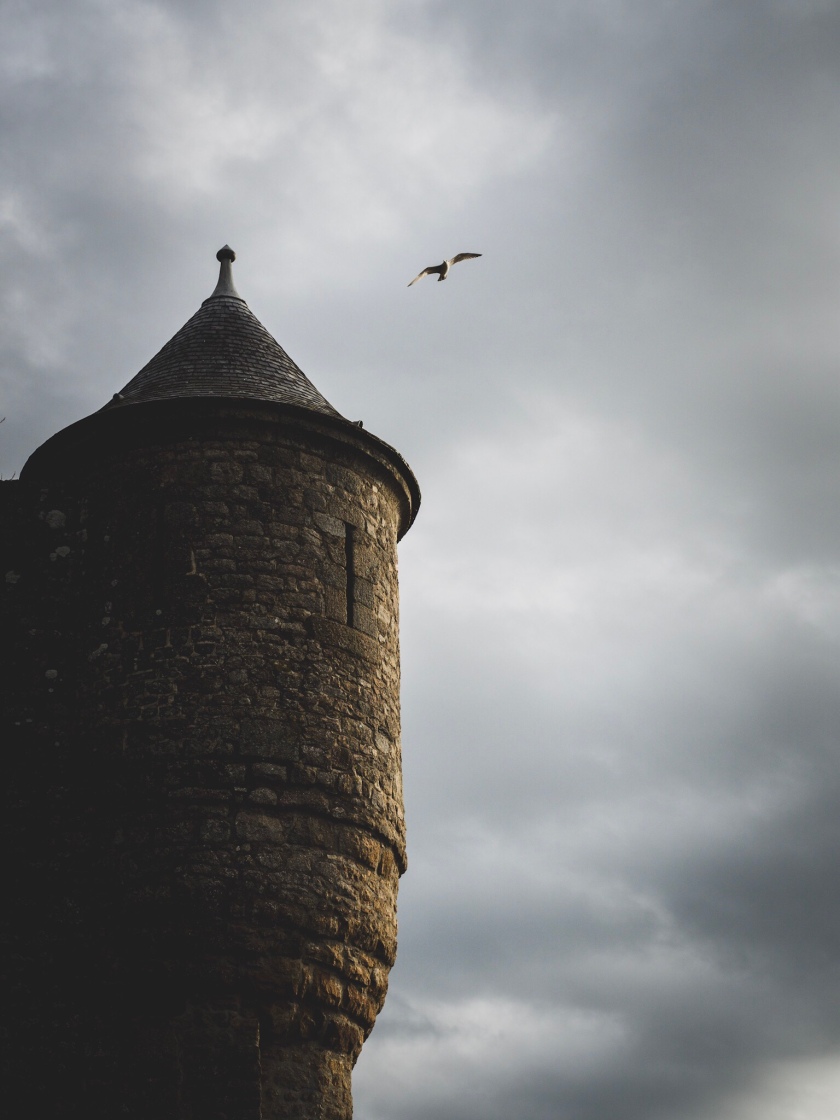 But this is perhaps an injustice, as the spaces that we can explain are extraordinary, and the design shows a level of sophistication and insight into not only the engineering required to build a remarkable space, but also the ways space can be shaped to create an emotional response (like the tall, slender windows in the refectory, that bathed the room in light but are invisible as you enter the room). This is an abbey of drama, prestige, intrigue, history, story, and time. And it is still unfolding, still being told…

As our shuttle bus groaned away from the kerb on our return journey, rain had started falling in earnest. A kind of light mist began to curl around Mont-Saint-Michel, softening the lines, reducing clarity, wrapping it up again, ready for tomorrow’s pilgrims, tomorrow’s tiny marks in the impossible pages of its time. 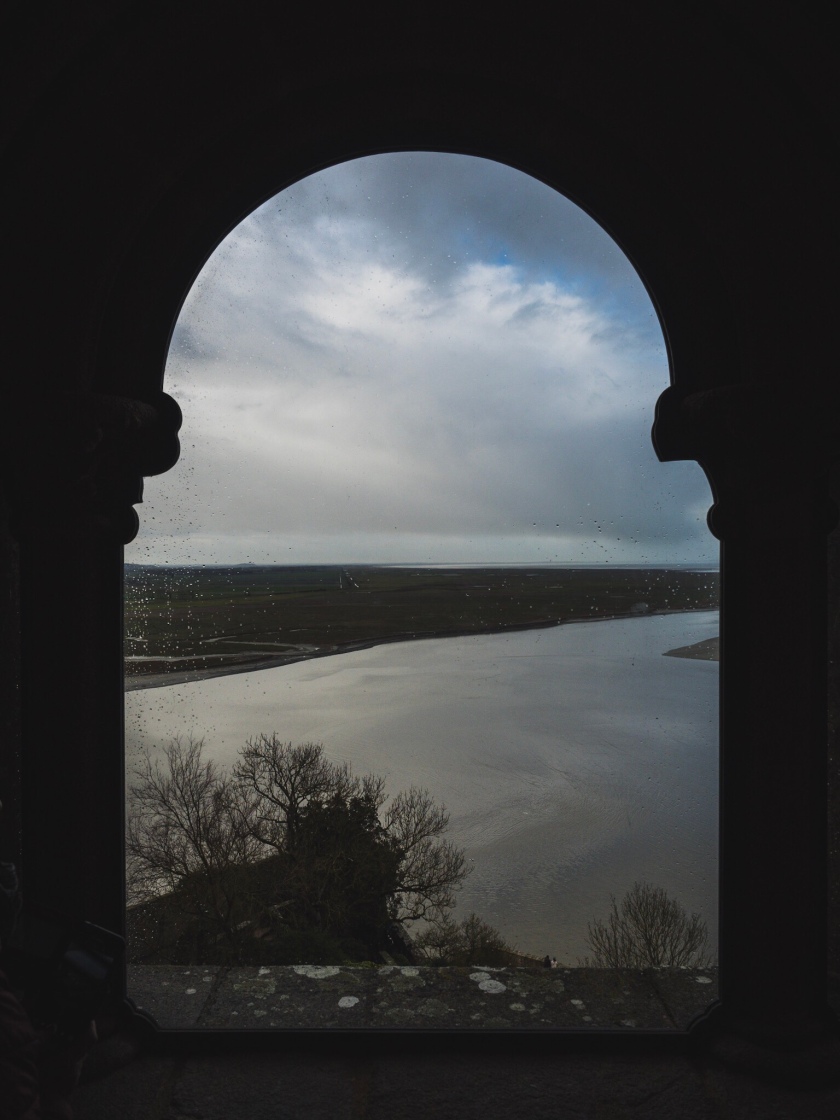 I’m into flowers at the moment … when they’re this beautiful it’s hard not to be.

Calla lily … a study in decay

The fading beauty of the calla lily. 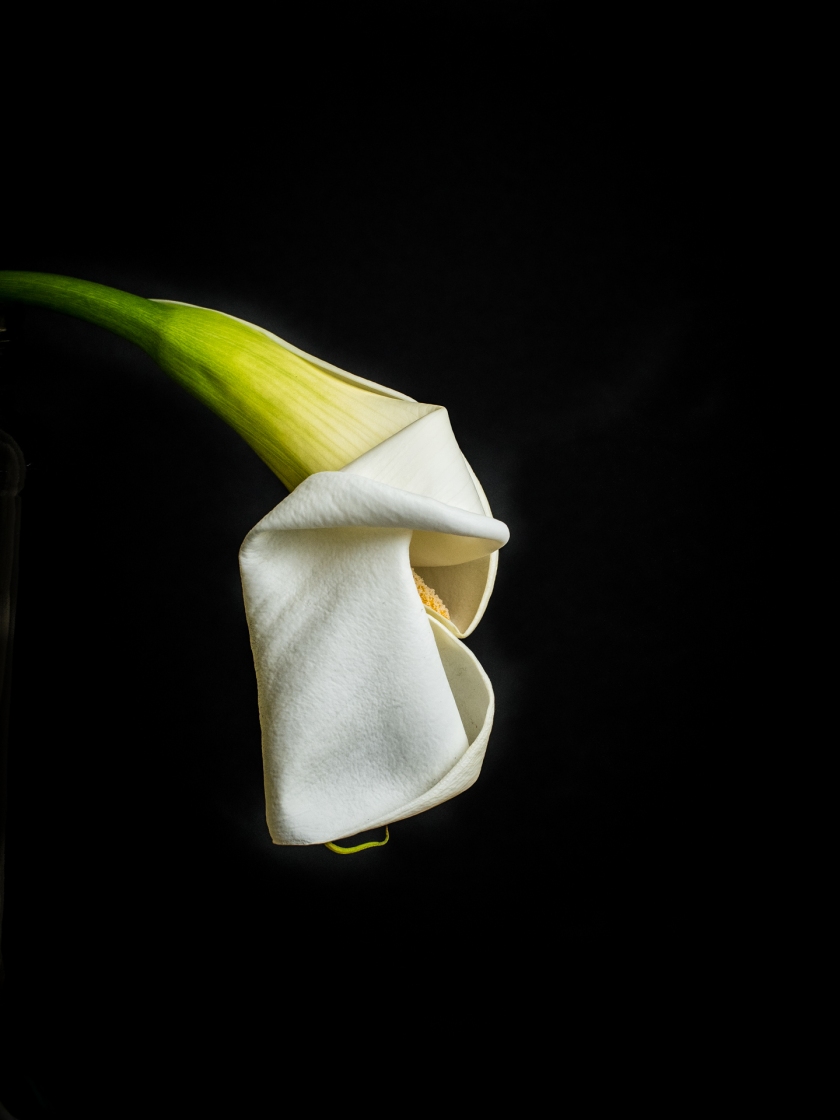 Calla lily … a study in subtlety – and shape – and dancing …

One more colour image of the calla lily Tim found in a laneway last week. I could take endless photos of these flowers – I love their delicacy and seeming-simplicity, yet there’s a robustness and complexity to them too. 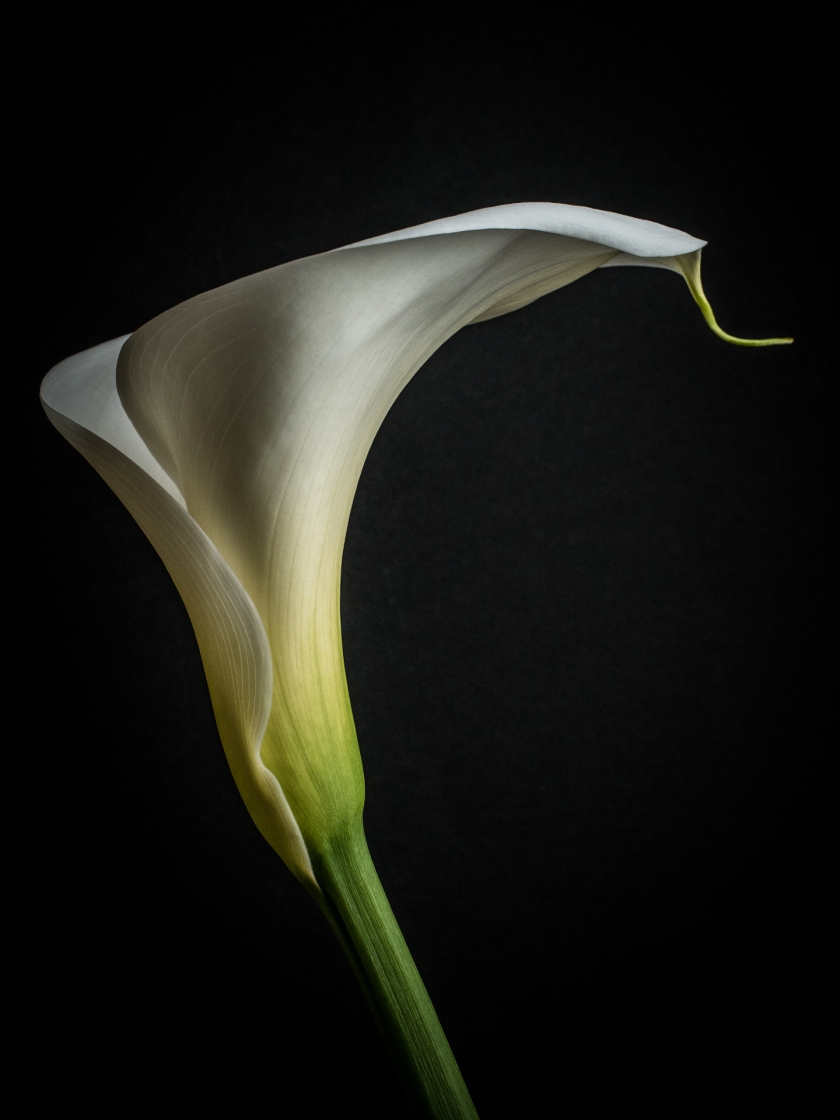 What do you think? Are you as captivated by these flowers as I am?

I’d been looking for calla lilies for a few days when Tim spotted some in a laneway on his way to the station.

I had in mind a black and white shot, reminiscent of the beautifully classical work of Robert Mapplethorpe (a very ambitious aim) but when it came time to process the images I found many of the colour ones just as appealing. I’ll get to some of the black and white ones in coming days, but for now, here’s one in colour. 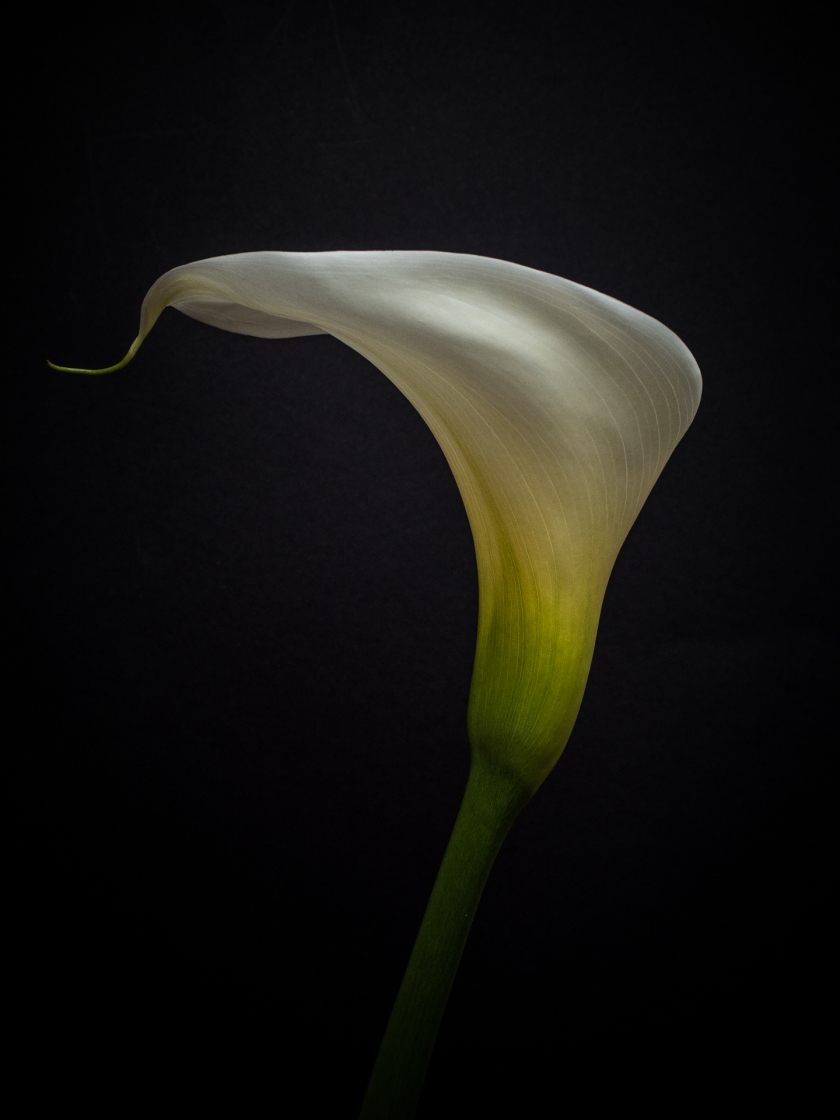 The lines of these flowers are delicate and beautiful, and there’s a sense of movement captured within the image that I particularly like.

Thanks to Tim for lighting this so beautifully.

Robbing the flower of all its colour doesn’t rob it of its beauty – it just allows us to see differently. There’s a lesson in there I’m sure.