I started this post a few months ago … and have added a sentence here and there in the time between now and then, but for some reason it’s been difficult to put together.

I’m not quite sure why, but I’m beginning to think it’s because it’s intensely personal and I’m not sure I want to share it.

It’s also more than that. I want to skate across the top and just describe our weekend, rather than deal with what lies underneath – and I’ve come to the conclusion that that’s okay. I don’t have to deal with the underneath here, in these posts that others (some familiar, some unknown to me) may read.

And there’s more still: I feel others’ judgements – the questions and voices I can hear from some of those unknown and some of the familiar: “Why blog about something so personal?”, “Why put this out there for others to read?” – questions and voices that I can choose to ignore, particularly as they’re in my head and therefore not real, and they’re stopping me from finishing this post.

So, here I am, on a sunny Saturday morning, finishing what I started months ago.

“The forecast is for rain all weekend”, my Queensland-based students reliably informed me during a web conference in early March.

“The forecast is for a hot weekend”, my Melbourne-based husband reliably informed me the next day.

I felt torn, but my ticket to Queensland was booked. I would just have to deal with the rain. At least it wouldn’t be cold, I thought.

I flew into Coolangatta on a Friday morning after an early start. Mum, Debbie and I talked and ate and talked at our favourite cafe – Mervyn Roy’s at Bilinga – then after a quick detour to Robina for some shopping, we headed into the hinterland.

We found our accommodation at the end of a tiny road, surrounded by giant trees being whipped furiously by the wind. 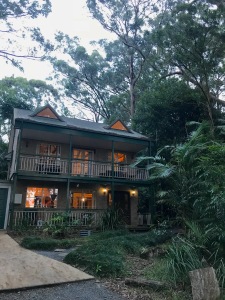 We are not known for letting a little bit of wind (read lots of wind) deter us, so we dressed for the cold and headed out. Dressing for the cold for me meant putting on all the clothes I’d packed. Luckily one of those things was a jacket. Also luckily, it did up even though I was wearing all my other clothes. As you can see, my footwear left a little to be desired. When I got to the (very) muddy track, it become patently clear that my footwear left a lot to be desired!

Importantly, I was wearing beautiful earrings!!

We clambered (elegantly, it has to be said) down a short but very steep embankment and found our way to the proper track. It was getting dark, the wind was still whipping the trees, and it had started to rain. Undaunted, we soldiered on. We had a goal: find Purling Brook Falls before dark.

We had ten minutes before the sun set – although, to be honest, the sun wasn’t exactly on show – and nine minutes before hyperthermia set in. We dawdled as fast as we could – Mum really does need one of those hiking sticks – except Deb didn’t dawdle quite as slowly as Mum and I. You can just see her charging ahead in her red rainproof coat. I actually think the lack of rainproof coats was slowing Mum and I down. 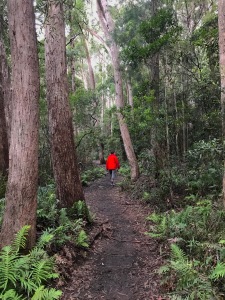 A quick snap of the falls and we were back to the house and the roaring fire (thanks to Bernie for lighting it for us). 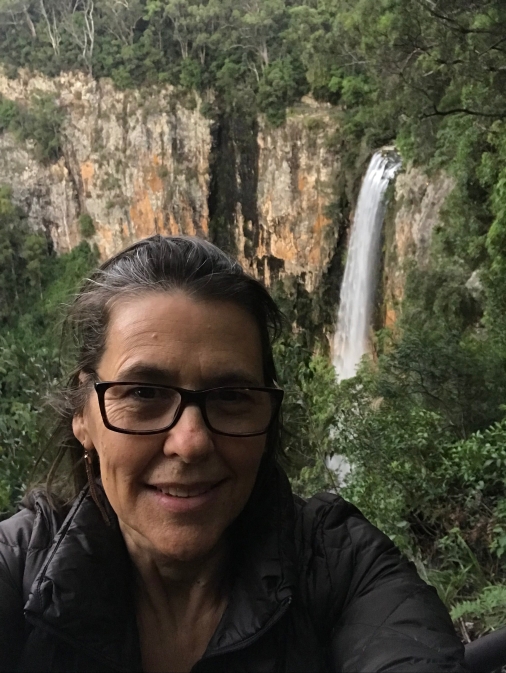 The rain continued to pelt the roof all through the night. I admit to not hearing it despite being upstairs, but Deb let me know the next morning as she’d slept in the sleep-out with its alsynite roof, not known for muffling any sound let alone the sound of continuous and heavy rain.

Despite her lack of sleep, she was up bright and early making pancakes and bacon for breakfast. Thusly fortified, we headed out into the rain and wind for another look at the falls.

We found the rockpools we’d bathed in many (many) years ago on a summer camping trip – and were reminded of the ‘soap incident’. When I say ‘bathed’ I mean just that. The rockpool was our bath – and so we’d taken soap and towels and worn our bathers (decorum is important in the bush, particularly when you’re 14) and gone to wash in the pools. What we hadn’t counted on was the water’s flow – it washed our soap over the edge, never to be seen (by us at least) again. I can still hear Dad yelling, “don’t follow it! Let it go.” Sound advice which I distinctly remember following.

We walked through one continuous downpour, neither Mum nor I were adequately prepared (as you can see if you watch the video).

We eventually found our way to a lovely (warm and dry) cafe, where moments later our brother Warren appeared.

Finally, we were all together.

We were all together to spend the weekend as a family celebrating what would have been Dad’s 80th birthday. It was a weekend of quiet contemplation, of reminiscing, of doing things that were slightly uncomfortable (walking on muddy tracks in the rain and cold is not something we generally do for fun) because we could hear Dad encouraging us to get out into the outdoors and enjoy them, no matter what condition the outdoors threw at us.

We spend more time in the rain – I had to take my glasses off as they were so wet I couldn’t see through them – walking through the bush, taking photos as we went so we can look back in years to come and remember how daggy we were (and how okay we are with that), how important and comforting it was to be together and how we could enjoy each other’s company even though we were all grieving. As hard as it was to acknowledge, it’s true that life really does go on. 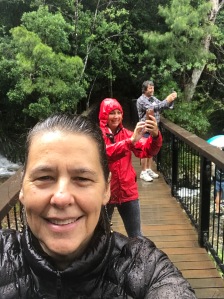 The last time Warren and I had been to PurlingBrook Falls was a number of years ago when we were both visiting Mum and Dad over the summer – Warren from out west and me from Tasmania. For about five or six summers we’d gather at Mum and Dad’s with kids in tow and spend time in shopping centres and McDonald’s playgrounds because they were the coolest places we could find … and of course, much more time at Currumbin Creek estuary, a quick walk from where Mum and Dad lived at the time.

One year, Dad had the ‘good’ idea of taking the kids bushwalking. It’ll be fun, he said enthusiastically, but their faces remained sceptical. We headed to Purling Brook Falls and tackled the track from right of the falls to left, heading down the steep track (which is now closed for repair) one side, under the waterfall at the bottom, then up the other side. It’s a steep walk up and Emma, my youngest who was about 8 at the time, and Carly, Warren’s eldest, who was 7, complained the whole way! None of grandad’s enthusiasm or stories of the beasties lurking in the bush made an impact on their determination to hate it.

Despite the complaints, it was a lovely walk and I was sorry (kind of) that the track wasn’t open this time around, because I’m sure we’d have done the walk again. Although, really, we were being considerate of Mum – we didn’t want her struggling through the mud and rain – she’s getting on you know! 🙂

On Sunday, before heading home, we venture to the Best of All Lookout which generally has the most gorgeous views over the Tweed Valley and out to Byron Bay. Not this day though!

We take the obligatory selfie, just to mark the occasion, and as there isn’t anything to see, we head back to the warmth of the car. 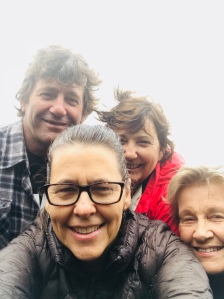 Even though we could barely see our hands in front of our faces let alone Mt Warning or Byron Bay, the Best of All lookout has more than views.

It also has a stand of antarctic beech trees. As soon as I walk into this short forest walk, I feel immediately at peace. It is these trees that provide me with the sense of consolation to which the title of this post refers. Each time I’ve been here, I’ve felt that same sense of consolation – the stresses of the outside world seem to slip away just a touch, my hands uncurl, my shoulders drop, and some of the tension I hadn’t known I was carrying in my body eases away.

It’s the same today. I can feel my grief loosening just a little, easing back on the tension I barely knew I was feeling.

We drive back to Mum’s the scenic way and she whips up a batch of scones for lunch in the way mothers have done for millenia: a no nonsense pragmatic approach to feeding her family. Jam, with spoons, cream, tea, a hodge-podge of plates, and the comfort of familiarity and togetherness.

We sit, as we always do, outside in the warmth and looking around I realise I’m not yet ready for Dad not to be there. I keep this in, and am convinced the others are holding their grief too, even though this weekend has been important and significant for us all. We each have our private grief, as well as the grief we share, and right now it’s still too soon to speak of it.

I know, deeply and intuitively, that while the consolation of trees soothes me, this time I need something more … this time I need wide open spaces, far-away horizons, warmth and unfamiliarity.

It was an important weekend for us all, spent in a place so rich in memory and remembrance, honouring Dad in our own way, mostly by being together.

You can read my sister Debbie’s blog post about the weekend here.